There are two types of consumer headphones: good headphones, and really good headphones. V-MODA’s Crossfade M-100’s undoubtedly fit in the really good category. They’re a bit pricey at $270.00 (Amazon listings), though the powerful sound that’s pumped out of them perhaps makes the cost worth it.

One thing to note is that I am by no means an audio professional, so if you’re looking for an audiophile-friendly take on the M-100’s, this won’t be for you. 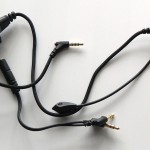 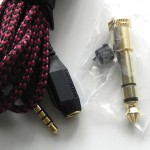 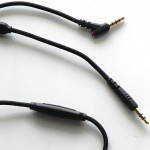 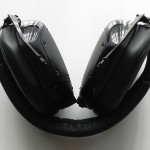 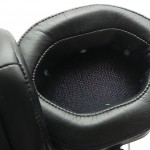 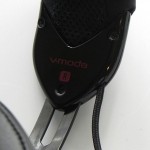 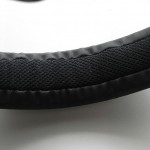 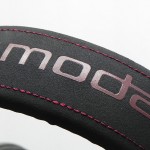 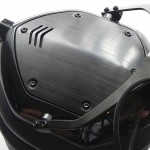 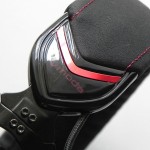 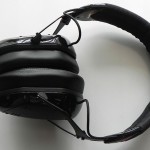 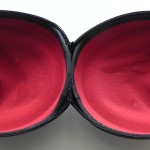 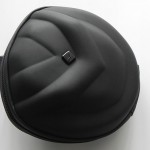 It all starts with what comes included with your purchase. Inside of the relatively compact packaging, you’ll find the following:

None of my devices use a 1/4″ plug, so the adapter was kept put away. The idea of the SharePlay audio cable is neat, as it allows others to plug their own headphones directly into the audio cable, though I didn’t find myself using this. Still, it’s a nice addition for those who may use it. With that being said, most of my usage was with the standard audio cable that utilizes an integrated remote control button and microphone. The button itself isn’t quite as clicky as I’d like, but it ultimately does its job. Audio quality from the microphone wasn’t the greatest, though. It’s worth noting that both of the cables are braided, making them tougher and less prone to tangling than traditional ones.

Design, build quality and construction are excellent all around. The headband, complete with a red-stitched suede cover (which also has mesh material on the underside for added comfort), is made of a strong piece of metal, but isn’t strong enough to where it applies to much pressure on your head. The height of each headphone can be adjusted using a basic vertical snapping mechanism, all using metal. Each snap (or click) feels very solid and stays in place just fine. Only a few inches worth of cable is visible, as it will run from one headphone, up through the headband and into the other headphone. This is because you can plug the main audio cable into either headphone. Additionally, you can plug another pair of headphones into one of the empty ports, allowing you to daisy chain multiple audio peripherals. As for the actual headphones, they use what I believe is tough plastic.

There are four visible V-MODA logos throughout the headphones. One is at the outside-top of the headband as well as both outside ends. The fourth placement is on the inside-left side of the headband, just above the right headphone indicator. Each headphone has its own shield piece that can be easily be customized on V-MODA’s website at no extra charge (at least at the time of this post). There are quite a few designs, colors and materials to choose from to make these headphones really suite your style.

The earpads that come included with the M-100’s are generally comfortable, though they started to cause a minor amount of pain after roughly an hour of non-stop use. I received a pair of XL memory cushions, which are available on Amazon for $20.00. These greatly increased the amount of comfort, and are really a must-have for those who wish to use these headphones for long stints. They weren’t the easiest to swap, as you basically have to pull (with a fair amount of force) the existing cushion off by yanking on the cushion itself. With either type of cushion, I only really had immediate discomfort with my right ear, which also happens with other over-ear headphones, so I can’t necessarily fault V-MODA for that. On the bright side, they aren’t terribly heavy, and I got used to the weight of them on my head relatively quickly.

If you plan on traveling with these headphones, you’ll be pleased to know that the headphones can be folded into each other and safely placed in the included protective hard case. This method only works when you don’t have a cable plugged in, so the case has a few straps to keep a wrapped cable from moving about. Folding them into place comes with a satisfying click, too.

Everything sounds great so far. But how do they really sound? The simple answer is that they sound really good. Right off the bat, they provide powerful, punchy bass, something that those who enjoy bass-heavy rock and electronic music will love. Even with the deep lows, it doesn’t take away from the rest of what you’re listening to, as the mids as crisp while the high end is plenty pleasant. It’s actually quite difficult to explain. Explained differently, the moment you put them on and press play, you enter a world of sound that makes you never want to take them off. You may actually turn the volume up (more than you actually should), as everything just sounds so nice.

And they don’t only sound good with music. The M-100’s make for some great gaming headphones. Because they provide quite a bit of balanced bass, games with explosive action scenes sound more immersive than ever. The rest of the audio range is handled well on its own, making other sounds heard in the game sound terrific. The same can be said for watching movies.

If you find yourself using the M-100’s for audio calls and voice chatting while gaming, you may want to take a look at V-MODA’s BoomPro microphone, available as a standalone product for just about $30 on Amazon. It adds an adjustable microphone to your M-100’s (or any headphone, really) that also has extra-long cables, integrated volume controls and more. You also get an adapter that lets you plug everything into your computer’s dedicated headphone/speaker and microphone ports. This adapter also works with other headphones that have integrated microphones. During my testing, I had to enable a gain boost of a whopping +30.0dB. Otherwise, the audio would be incredibly low to where you can’t really hear anything. The audio boost brings everything to normal levels, though you now have a ton of noise/hissing that’s introduced. It sounds as though the microphone has a lot of potential, as when speaking, it doesn’t sound too bad, except for, again, the added noise. In the end, for my particular setup, the microphone didn’t work very well.

If you made it this far into the post, you may know where my recommendation is headed. If you happen to be open to spending upwards of $300 for a pair of headphones, the Crossfade M-100’s will deliver a listening experience that you’ll never forget, that should last for years to come.