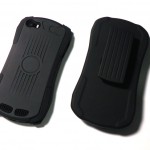 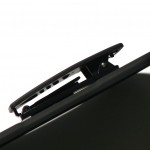 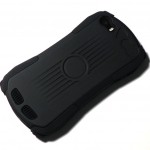 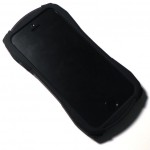 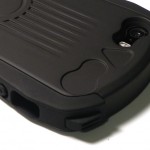 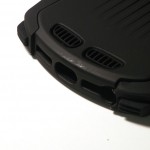 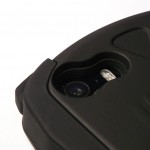 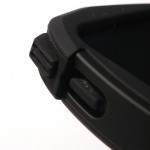 Aside from the generic packaging, don’t expect any extras included with your purchase. This is inconsistent with some of EMPIRE’s other products, where they include at least a screen protector. This is a little unfortunate, but for the price, there’s not much room for complaining.

The actual title of the product is the “Tough Armor black belt clip holster kickstand case,” which is a bit of a mouthful. As it suggests, included is a holster that holds the case extremely well to where it won’t be coming apart anytime soon. The belt clip itself is very stiff, so it won’t rotate when you don’t want it to. The holster’s clip can also extend outward to act as a kickstand, which I didn’t know about while doing my video review above. An image of this in action can be found above.

The case itself is made of two pieces, including one that’s made of silicone that your phone goes into, and a small plastic piece that fits around it to keep everything held together well. The odd part about it is its shape, as you can tell from the photos. The sides curve in, which helps make the case comfortable to hold. They do extend out from the sides toward the top and bottom, so it undoubtedly adds quite a bit of bulk to your iPhone.

With that bulk comes a lot of extra protection, thanks primarily to the shock-absorbing silicone that surrounds the phone. There’s no front protection, so using your own screen protector will at least help protect it from basic scratches, but that goes without saying, with or without a case like this.

It still features all of the cutouts and openings that you’d expect from a smartphone case. The volume and power button covers are incredibly clicky. The cutouts, however, are all very recessed, so needing to access them may be difficult.

In the end, this is a unique case with some extra features, such as the included holster that doubles as a kickstand, at a price that many might enjoy. If you aren’t looking for protection, this wouldn’t be very practical, although if you want something that actually is a bit unique and different from the thousands of other iPhone cases, this wouldn’t be a bad choice in that regard.