Courtesy of Tmart.com is their wired, USB Xbox 360 controller, in red (other controllers here). It’s priced at $25.49, just $2.52 cheaper than the official controller from Microsoft, at least on Amazon. 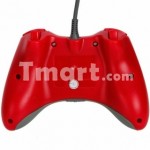 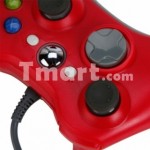 First off, everything works, which is crucial, including all the buttons and both analog sticks (more on those in a second). The controller itself is rather nice. Because it’s wired, there’s no battery compartment on the back, grip is actually more comfortable than on the original wireless controllers. Also nice are the stubs on the analog sticks, just like the original, and you do get your standard ports on the bottom of the controller.

Unfortunately, that’s about all that is “good” about this controller. Everything works, but the shoulder buttons are far too hard to press, especially on-the-fly. The triggers, while they work, feel cheap and breakable. To top it all off, the left analog stick doesn’t do the “down-left” movement very well, perhaps due to the weird piece of something rattling around the inside, freely, I might add.

While it is true we could have gotten a bad unit, somehow I doubt it. Plus, with the number of things that I didn’t like that probably are supposed to be how they are, I simply cannot recommend this controller. If you are looking for a cheap Xbox 360 controller, try Gamestop, especially now that the Xbox One is coming soon. If you do want this controller pictured, click the Tmart link above.