For those with multiple devices that charge via USB-A, a multi-port charger allows you to keep them all powered from just one unit. The ipax 8-port USB charger does just that, and is very affordable at under $17 on eBay, or for just a tad more on Amazon. While it comes in very handy when traveling, it still makes things very convenient, even when being used at home. 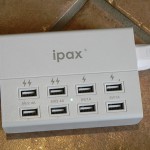 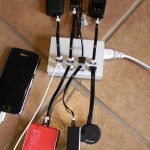 In the box comes the 8-port USB charger and a thick, lengthy, 3-pronged power cord. The charger itself features 4x 2.4A USB ports and 4x 1A ports. For stability, the charger features four rubber feet along the bottom. In the middle of the ports is a green light that stays illuminated when the ipax unit is plugged in and receiving power. It’s a rather bright light, and is enough to keep the ceiling of a small room lit.

Many smaller devices don’t accept input of more than 1A, and this is where they’ll do just fine in any of the 1A ports. For phones and tablets that accept higher currents (such as many modern Android smartphones), you’ll want to use the 2.4A ports. Of course, you can plug the slower devices into these ports, but there won’t be any speed benefit. Combined, the charger will output a maximum of 10A. Even when all ports are actively being used, I didn’t notice any slowdowns in charging rates for high-powered devices, such as my Galaxy S7. Additionally, the more ports that are pushing out power, the warmer the unit will get, but it never got too warm to where concern was warranted.

I’ve been using this charger daily, and have no complaints whatsoever, except for the way-too-bright green light. The convenience benefits of having a device like this alone easily justifies its already-low price.