While it’s difficult to cover up the impressive design of the HTC One M9, it’s still for the best. As the name suggests, Speck’s CandyShell Grip ($34.95 | Speck, Amazon) offers an extraordinary amount of grip while adding quite a bit of protection. 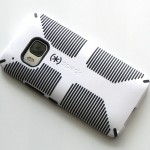 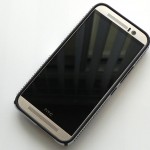 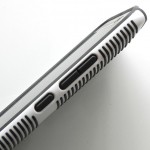 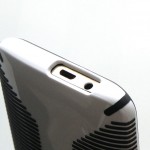 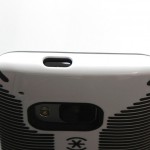 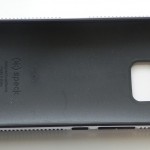 Some years ago, Speck stopped including screen protectors with their cases. So with your $34.95 purchase, you’ll be getting only the case. Fortunately, the features of the case make up for that.

For materials, the CandyShell Grip features a hard polycarbonate shell with a soft (yet strong) TPU layer on in the inside. The lines that you see on the outside of the case are made of that same, soft material, and provides an incredible amount of grip. To me, nothing’s worse than using a smartphone that’s extremely slippery. While the One M9 isn’t bad on its own, this case makes it so that you never have to worry about it slipping out of your hand. All of this shock-absorbing material makes for a case that adds a lot of protection for your device. Whenever I did happen to drop my M9, there’s not a single worry about the phone getting damaged. While there are a few other color combinations, I found the white/black variation to be the most neutral, and looks quite good.

There are cutouts for everything that you’ll want access to, including the top IR blaster, rear microphone, bottom ports and more. They’re also quite sizeable, so you shouldn’t have any problem using oversized connectors, among others. The volume and power buttons use the same TPU material to keep them covered, and don’t take away from the feedback — or button presses — much at all.

Whenever I see a new smartphone, I check Speck to see if there’s a CandyShell Grip available for it. It’s always my go-to case for today’s latest and greatest smartphones. I believe that the added grip alone makes this case worth it. The added protection? That’s a great added bonus. If you’re looking for an HTC One M9 case (or any other smartphone, for that matter), you simply can’t go wrong with the CandyShell Grip.