Spigen makes some pretty slick-looking cases for a number of devices, and the Neo Hybrid Metal is no exception. There is, however, one sizable issue with it that you’ll soon learn about. A big thanks goes out to MobileFun.co.uk for sending the case over for review. It’ll run you £29.99, or $47.99. They have a large selection of iPhone 6 Plus cases, so if this one isn’t for you, they should have something else that you may like. 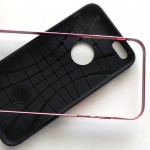 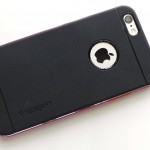 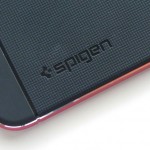 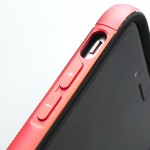 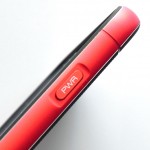 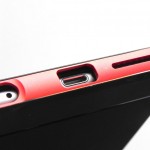 The Neo Hybrid Metal is a two-piece case. The first piece is a thick TPU case (that could probably be used on its own). While it has a cutout on the back for the Apple logo, there’s no protective film to keep it covered. So since it’s exposed, you can expect your shiny, precious Apple logo to become filled with scratches in no time. The back side of the TPU has somewhat of a dimpled texture, which looks and feels nice. The inside has a unique Spigen design to it as well. The second piece is the aluminum band that fits around the edge of the TPU, painted with a smooth red overlay. The metal button covers provide enough feedback, but the level of click could be better. All of the cutouts are large enough, but could be a tad bigger, though the camera cutout is perfect to me (and I had no issues with the LED flash). The case also features a lay-on-the-table design, allowing you to place your iPhone display-down onto a table without the display actually touching the surface. Combining the TPU case and the aluminum band should provide you with enough protection from the average drop, but anything serious could damage the metal bumper, which could ruin the overall aesthetics of the setup.

My only real issue about this case, which happens to be a deal-breaker, is that it reduces cellular signal and data speeds. I’m on 4G LTE 99% of the time, so I can’t speak to whether or not this affects Wi-Fi performance. In the video review above, you can see that not only is the signal reduced by one dot/bar (roughly -10dBm, which could also be the difference between having service and ending up with no signal at all), but the upload speeds are severely reduced. Interestingly, download speeds remained normal. I have been in areas where both the upload and download speeds are reduced–not just the upload. In addition, I found a more dramatic signal difference when on 3G/”4G” HSPA and 2G “EDGE.” In those instances, I would go from 4 or 5 bars of services to 2 or 3. Your mileage may vary, but I honestly don’t see myself using this case because of these issues. It seems to be a fairly common issue with metal cases, however.

Gone are the days where Spigen (previously better known as SGP) includes extras with their cases. Some of the extras that were once included include their high-quality screen protectors, and even some home button covers in various colors.

Should you find yourself looking past the potential signal and data issues in addition to its steep price, this could be an absolutely outstanding case. Its slim profile and sleek design make it visually appealing while offering function and protection. Should the price drop and the signal issues be solved, I would most certainly evaluate the product again. Until then, I can’t say that I could recommend it.