If you’ve ever gone case shopping (who doesn’t?), you might’ve came across Speck’s CandyShell Grip cases, available for devices other than just iPhones. They generally offer an adequate amount of protection while giving you an extraordinary amount of grip, hence the name. The iPhone 6 Plus version ($39.95, Speck | Amazon) has been great thus far, as expected, just as the HTC One (M8) and iPhone 5/5s version that I’ve used were. If white/black isn’t your preferred color scheme, several others are available to take a look at. 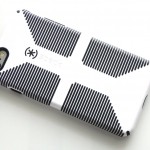 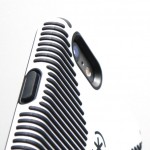 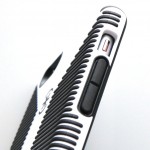 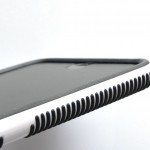 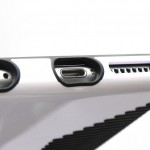 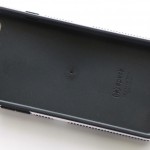 Unfortunately, like with other Speck accessories, extras, such as screen protectors, aren’t included. I would normally knock a company for failing to spend the extra quarter or so to include things like that, but the case, fortunately, easily makes up for that.

As far as materials go, Speck isn’t specific, but the black material on the white/black model is rigid TPU while the white is hard, glossy polycarbonate. Along the back are plenty of strips of that TPU material, which are what provides you with all of that grip, which really work. The same material can be found over the volume buttons on the left and the power button on the right. In terms of feedback from pressing them, you get plenty of “click,” but it’s just ever-so-slightly mushy.

The bottom has seemingly-large cutouts for everything along the bottom, all outlined in that same black material. Interestingly, the speaker cutout doesn’t have the same outline, which I would’ve preferred, but that’s a minor thing to make note of. Lastly, the camera cutout on the rear of the case properly conforms to the camera area, and is lined in black. I’ve experienced zero issues when taking photos using the LED flash.

Yet again, Speck did a great job with this case. It’s easily my go-to case that I recommend to others, as the protection, design and added grip make the $40 price well worth it.