“The next big thing is here,” claims Samsung. Their Galaxy S5 (AT&T, Samsung, Amazon) certainly has an impressive set of features that should surely sell millions, but how well does the device actually work?

Let’s first start off with a rundown of the hardware specifications, for those who are into them.

From this list, the most unique thing about the Galaxy S5 is that it can record 4K, ultra-HD video at 30 frames per second, which only a few other phones currently available are capable of doing. 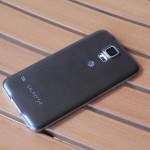 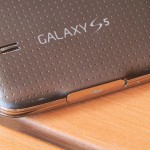 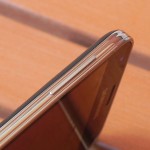 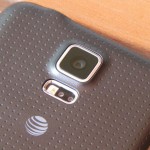 Samsung has certainly improved upon the overall design of the Galaxy S5 compared to last year’s Galaxy S4. While I have “charcoal black,” you can get it in white or gold.

The side of the phone is ridged to help with grip, as seen in the Galaxy Note 3. The most obvious design change is arguably with the back of the phone, using a dimpled back cover with a soft-touch/satin feeling to it. This type of material greatly cuts down on fingerprints and scratches compared to glossy plastic. Some even say that the back cover can look like a Band-Aid, which I found to be silly.

Button placements include a volume rocker along the left side, while the power button is on the right. All of them provide you with a great amount of tactile feedback without being too easy to press. For ports, you’ll find a 3.5mm headest jack up top, while a covered USB 3 port is at the bottom, an addition also coming from the Galaxy Note 3. Also at the bottom is a microphone, while the top features the IR blaster for controlling your home A/V equipment.

Oh, the front! There, you’ll, of course, find the beautiful 5.1-inch display, some sensors, an LED indicator, the earpiece, 2 capacitive navigation buttons, a home button and the front-facing camera.

Along the back is the 16MP rear-facing camera, LED, the new heartbeat sensor and horribly-placed speaker.

Speaking of the speaker, it’s not something you’ll be wanting to use for long periods of time. The quality is just enough to get you by for speakerphone calls and very brief periods of listening to music. It’ll get loud, but it doesn’t sound that good at high volumes.

In general, you’ll want to use external speakers or headphones for long periods of use. 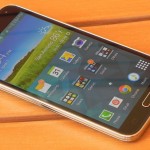 On the Galaxy S5 is a “Super AMOLED” display, which Samsung used on their flagship phones in the past. It’s a mature LCD technology that results in superb viewing angles with good color accuracy (sometimes a bit oversaturated). The backlight can get very bright, or extremely dim, good for any occasion. However, step outside in direct sunlight, and even at maximum brightness, you may have issues seeing it, whereas other phones can be a bit better. 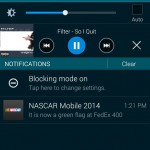 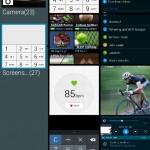 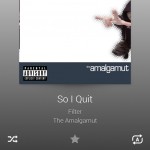 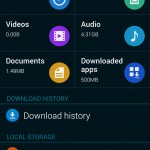 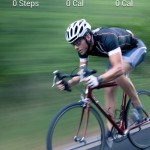 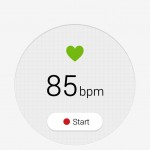 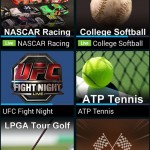 The latest version of Android is 4.4.2, also known as “KitKat,” which the Galaxy S5 happens to come with. Samsung modified Android with their own features, designs and apps, known as TouchWiz. It’s been known for being extremely feature-rich, in turn a bit confusing. This time around, Samsung opted to make things a little simpler, which is certainly noticeable if you’ve used the Galaxy S4, for example. You’re still bombarded with different things. For example, use two fingers and pull down on the status bar. You’ll be greeted with dozens of different things that you can toggle. Another example is the Settings app. Just open it up, and you’ll immediately see how vertical the app is, with so many options that make finding certain things difficult. Fortunately, they let you add your more commonly-used settings into a quick settings section.

Samsung’s stock applications, such as Email, Music and Messaging (for SMS), could use some improvements. Their interfaces are difficult to use. Specific to Email, it has quite a few bugs. For example, emails that I’ve trashed will often come back into my inbox. Or, emails that I’ve deleted on other devices won’t delete on the GS5. I was happy to see that Android has a large number of alternative email apps to use.

Not all of Samsung’s included apps are bad. For example, the weather app looks excellent, with a clean, simple interface.

Since this is an AT&T phone, it’s only common for it to come loaded with apps that you’ll most likely never use, such as AT&T Locker and Navigator. That’s not necessarily a bad thing, since you can either disable the app altogether in Settings, or simply hide the icon from the application drawer/list.

Like the Galaxy S4 and S5 Active, the normal S5 is dust resistant and water resistant up to 3 feet, and is IP67 certified. If you accidentally spill a glass of water on your phone, you’ll be fine. Want to get some underwater shots? That’s alright as well.

The phone features the fastest smartphone hardware available today. Like with most Samsung phones, Android’s animations can often be sluggish/choppy, while apps might take a few seconds after tapping on the icon before the actually open up. I imagine a software update from Samsung can speed things up tremendously, but it’s unfortunate that things weren’t better at release.

Still, the phone is speedy. Apps mostly open quickly, and perform very well afterwards. But like with other high-end Android devices, games don’t have consistent frame rates. For general users, games are plenty smooth, though. The multitasking interface can sometimes take a few second to open after tapping the button, which is unfortunate for when you want to quickly get things done. Again, a software update could help with many different things.

If you have a computer with a USB 3 port, get ready for some blazing-fast file transfers via the included USB 3 cable. File transfers are incredibly fast compared to USB 2 to where you can transfer several gigabytes worth of movies in a fraction of the time. 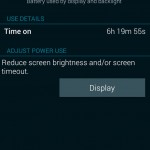 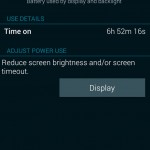 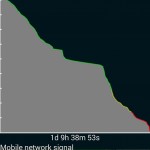 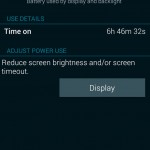 The strongest point of the GS5 has to be its battery life. In every usage scenario, I’ve been able to get a minimum of 24 hours, going from unplugging it in the morning to having to plug it back in whenever it reached 1% battery remaining. Most of my testing included moderate usage, all with Wi-Fi off (using 4G LTE is more taxing on resources than using Wi-Fi). In addition, the phone gets fantastic standby time, especially if you enable “blocking mode,” which prevents your phone’s screen from turning on when receiving notifications, of which I receive many of throughout the day.

When using the basic power saver mode, turning the screen to grayscale colors while limiting the smoothness, the numbers were even better. There’s also an “extreme power saving” mode, but severely restricts how you can use the phone, but can achieve incredible battery life numbers. 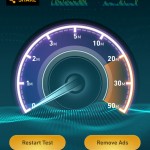 Cellular performance varies depending on a wide variety of factors, including location, time of day, congestion, etc. AT&T in San Antonio, TX, at least in terms of data performance, is a mixed bag, but is generally fine. In other words, data speeds varied quite a bit, even on a block-by-block basis, but that’s par for the course across all carriers. Call quality was good, being loud and clear on both ends, though you’ll want to keep speakerphone calls short due to the somewhat poor and annoying audio quality. Generally speaking, cellular performance, for both data and calls, is just fine and is what you would expect a smartphone today to perform. 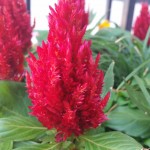 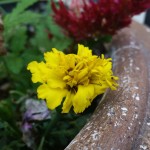 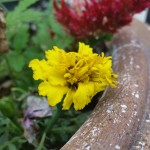 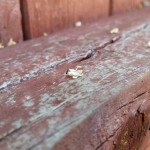 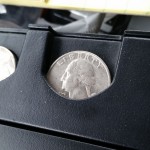 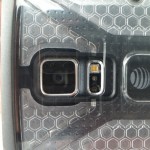 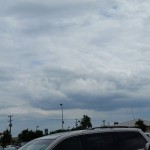 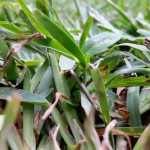 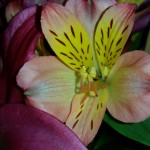 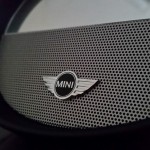 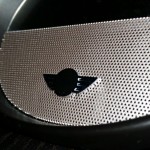 The camera can be hit or miss, but mostly hit. It can certainly take some fantastic looking shots, especially with HDR on. The phone can even show you what the HDR photo will look like in real time.

The “miss” comes with taking low-light photos. After pressing the shutter button, it’ll tell you to hold the phone still, sometimes for 10 seconds at a time, before the photo is taken. This is a poor user experience to where you can easily miss the moment. None of this is an issue when taking photos in areas with plenty of light, with photos being taken almost instantly.

For some reason, I wasn’t able to find my recorded videos on the device. 1080p recordings at 60 frames per second were silky smooth and looked quite nice. 4K video looked good as well, but isn’t practical on displays that aren’t 4K. You also don’t get video stabilization when recording 4K video.

With so many excellent high-end flagship phones being released this year, did Samsung do enough to keep themselves ahead of them? I’d have to say so, considering the fact that the Galaxy S5 has proven to be a very solid phone all around, although it can certainly use some software improvements. It cuts back on the clutter, feature-filled experience just a tad, making things just a little more simpler to use than prior models. USB 3 connectivity is a nice edition while the camera and display are things of beauty. Is it enough for last year’s Galaxy S4 owners to upgrade? Probably not, but anything prior would make the S5 a no-brainer.