This year’s refresh of the HP ENVY x360 13t provided a great design and set of features while being competitively priced.

Costco’s variant — the 13-y013cl — was recently on sale for just $999, and can be found on their website here. I gave this model a go for about a week, but ultimately decided to return it, as this post will outline.

It’s also worth noting that Costco’s own website shows the ENVY as being more of a traditional aluminum / silver finish. In person — as you can see in my unboxing video below — is actually more of a darker gray color, which looks great. 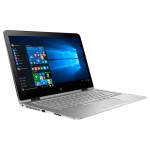 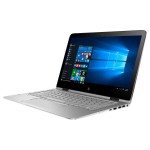 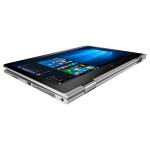 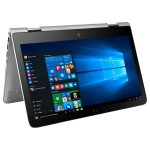 As you’d expect for a laptop of this price, the build quality and design are both fantastic. The metal body on this very thin notebook feels premium and solid. There’s really nothing to complain about in this regard.

Windows 10 actually handles touch on a large screen rather well, and I’ve found it a complete joy to use. While you can fold the screen all the way back to use the ENVY as a tablet, I often found myself folding it to an angle that makes it ideal for tabletop use. I’ll never buy a laptop that doesn’t have a convertible touchscreen.

As nice as the keyboard feels, I noticed it would miss input when pressing on a corner of a key. It’s probably not the best way to type, but compared to my MacBook Air’s keyboard, the ENVY’s immediately started to miss letters.

HP opted to use non-Precision trackpads from Synaptics. While wide and comfortable, tracking isn’t quite as precise as I expected. I often found that, when clicking, the cursor would move as I’m pressing the trackpad down, resulting in clicking on things that I wasn’t aiming for. This alone is what drove me to return the ENVY. There is also a noticeable delay when using multi-finger taps, such as 2-finger tap-to-right-click. Further, an issue with quality was that, even if you gave it a light tap, it would sound as though there is a gap between the bottom of the trackpad and the ENVY’s chassis. I’ve used trackpads on sub-$500 laptops that worked better than this, and were all Precision trackpads.

While it sounds nice to have a 3200×1800 resolution display in a 13.3″ frame, I found that this resulted in poor performance in Windows when doing rather basic tasks. For example, opening apps often resulted in stuttering Windows animations. What’s worse is that videos would often drop frames or regularly stutter. I had to bring the resolution down to 1920×1080 to get it to perform reliably. On a side note, I think that a resolution this high is rather unnecessary for the screen size. In addition to the computer having to render 3200×1800 images, the display also has to always power them, resulting in worse battery life.

5GHz performance is very poor with this ENVY. Less than 5 feet away from my router, Windows was reporting a transmission rate of under 300Mbps. At further distances, videos would not play without constantly buffering. There were also several instances where, when watching live / streaming video, the Wi-Fi card would completely shut itself off before coming back on 10 seconds later.

While this particular ENVY looks good and has a promising spec sheet, I found that it falls short at being a good laptop. From a frustrating trackpad to unreliable Wi-Fi, I can’t recommend the HP ENVY 13-y013cl, or anything from their 2016 ENVY line (for that matter). Sure, software updates might fix these issues, but the fact that it’s like this out of the box is unacceptable for the price.