Urban Armor Gear’s smartphone and tablet cases are known for their rugged designs, reasonable prices and great amount of protection. All of that certainly goes for their Samsung Galaxy Note 4 cases. I took a look at the $39.95 Aero, their navy blue-colored case. 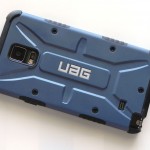 First, let’s start off with the basics. I always make note of when companies don’t include something extra with the purchase, such as a screen protector. I was happy to see one in the packaging, as well as some added accessories that make installing the screen protector easier. Of course, using some pieces of tape will provide the best results, as you can use one piece of tape to lift the screen protector up, and another piece to grab the debris from under the screen protector and on top of your screen. The clear screen protection film itself works rather well, though it has a slight rainbow effect to it when under certain lighting conditions. The cutouts are quite accurate and the overall alignment is perfect if you take your time. Due to the slight curvature of the Galaxy Note 4’s display, the screen protector doesn’t cover the entire screen, though I’d say that about 95% of it is covered. And now, onto the case.

The Aero combines the hard, polycarbonate “armor shell” with a hard and protective TPU “impact resistant soft core.” The added TPU along the 4 corners brings added protection for drops from great heights. I’ve used UAG’s cases for several other devices, and have always been extremely confident in the protection that their products offer. There were several instances where I dropped the Galaxy Note 4 onto the ground (with the case installed, of course) and was never once worried that there would be damage. The TPU material and way that the case is designed/shaped helps add grip to the somewhat-slippery device. The case will add a bit of bulk to your already-large smartphone, but not enough to where it makes things too difficult to use. Like anything, it will more than likely take some getting used to, but it shouldn’t take too long.

Speaking of design, it resembles a rugged, “tough” looking product, and is one that I’ve been a fan of for years. There are TPU covers for the power, volume up and volume down buttons, all of which feel plenty clicky when being pressed. There are also cutouts for everything that you’ll want access to, including all of the microphones, ports and camera cutouts. Assuming you purchased the Note 4 because of its S Pen feature, there’s a large cutout along the bottom/back of the case that provides easy access to the S Pen. If the navy blue “Aero” isn’t the color you’re interested in, it’s available in several other colors. I personally found the shade of blue on the Aero to look quite slick under many different lighting conditions.

At $39.95, you’re getting a fantastic case that offers tough looks and great protection, all without being as thick as a dictionary. If you’re considering an Urban Armor Gear case for your Galaxy Note 4, it’s worth picking up.