Have you ever wished that your iPhone had more storage space? While you can get a portable Wi-Fi storage drive of some sort, that requires using something external. mophie has a much more integrated solution, dubbed the space pack. It’s available in 16GB and 32GB capacities for $149.95 and $179.95, respectively. Not only does it give you more space to store your stuff, it charges your phone while it’s in the space pack, thanks to its 1,700mAh battery. While it might not offer as much space as the originally mentioned options, how well does the space pack itself work? 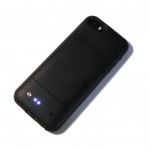 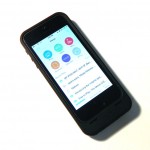 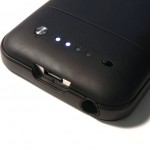 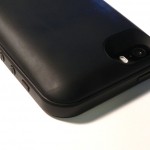 The answer to the above question is: pretty well. It would be perfect if it wasn’t mainly for the free (and required) “space” app from the App Store. While it works and should get the job done, it generally has a number of bugs that can be fixed and plenty of improvements that could be made.

If you’re thinking that the space pack looks familiar, that’s because it does. Think of it as mophie’s juice pack air, but with integrated flash storage. That means that the space pack will cost at least $50 more than the juice pack air. Of course, you’ll be getting extra storage capacity for you to store your media and general files. Versus paying extra money to get an iPhone with more storage, this could be the perfect option for those who wish not to do that. But don’t be thinking that you can store apps onto the space pack, because you can’t (thanks, Apple!), so that’s not particularly the goal of the device.

In regard to the space pack being a battery case, it works well, and looks somewhat nice. I gave the satin black model a try, and found that the back of the case lacked grip, and since your iPhone 5/5s is harder to hold with this case, due to it being a bit bulky/large, you’ll want that extra grip. The white model with the glossy back might be a better option. Fortunately, the satin model cuts down on the amount of scratches, but will still show fingerprints and smudges fairly easily.

The space pack has a two-piece design to make installing and removing your phone easy. There’s a small bottom piece, followed by a larger top piece, which is what you should slide your phone into. After doing that, the small bottom piece will snap together with a nice, satisfying sound. Nothing will operate unless both pieces are attached, since the battery has to power the internal components of the bottom piece.

Once installed, you’ll find that the space pack works pretty well as just a case. Along the left are covers for the volume button. And while they’re easy to press, they take away from the amount of feedback quite a bit. There’s an integrated silent switch switch above the volume buttons, which increases the click/snap when using the switch. The power button has a cover, and tends to provide more feedback. The one issue with this is that the phone will move around within the case ever so slightly vertically. If the phone is more towards the bottom, you’ll have little to no feedback when pressing the power button. When the phone’s more towards the top, it should work much better. My case is a promotion-specific sample, so I’m not sure if this is something that affects the actual shipping units. Continuing on, the back of the case has a decently-sized cutout for the camera area. On the front are front-facing openings for the microphone and speaker. In particular, the speaker opening is a positive one, because audio will actually be facing you, allowing you to avoid having to cup the bottom of your phone for better audio playback. Lastly, the bottom has the micro-USB port as well as a recessed 3.5mm headset jack. You’ll want to use the included 3.5mm extension cable so that you can use non-straight headphone plugs easily.

When it comes to charging, mophie says that the space pack should give you a 100% charge. If you don’t know, the iPhone 5 has a 1,440mAh battery, the iPhone 5s has a 1,570mAh battery, and the space pack has a 1,700mAh battery. Theoretically, that should be achievable. Unfortunately, I was able to get between a 74% charge (10% -> 84%) to an 80% charge (2% -> 80%). While that’s not particularly close to 100%, it’s still respectable. For the 80% charge, my phone wasn’t being used whatsoever during charging. It took a little over an hour before the space pack’s battery was depleted. For the 74% charge, I was occasionally using the phone at the same time, which is most likely what resulted in the lower overall charge amount. When the space pack completely dies, being able to use the storage goes along with that. So with your phone having 70%+, you still won’t be able to access the content from the space pack, unfortunately.

Now, about the storage feature.

You have two ways to access the space pack’s storage. The first way is to simply plug the case into your computer via the micro-USB cable. This will have the case show up as a normal removable USB storage device. The file system of the space pack is FAT32, so the maximum file size is roughly 4GB. I believe mophie picked FAT32 because of its universal read/write capabilities across just about any operating system that the user might be using the case with.

Transferring content to/from a computer is done via USB 2, so performance obviously won’t be as good as with USB 3. Interestingly, the space pack performed rather slowly, even by USB 2 standards. When transferring files from my computer to the space pack, I was getting around 7MB/s for speeds. When going the other way around, speeds jumped up to around 26MB/s, which was to be expected. So, if you plan on transferring large files (or at least a lot of them), you’ll want to get the transfer going so that you can go do something else while everything is working.

The second way, of course, is to use the free space app from the App Store. This is the main way to access and deal with content while out and about. The overall design of the app is good, with it representing iOS 7 very well. You have 6 main areas to choose from to access content, including photos, videos, music, documents, other files, and all files. When in the photo view, the app will cache thumbnails for all of your photos, which can take a while for photos that are large in size or resolution. The videos and documents sections are pretty straightforward. For music, things are divided mostly the same as in the stock iOS 7 Music app, by artist, album or song title. You can’t create playlists, but hopefully that’s not too far down the road. Other files will show files with extensions that aren’t relevant to the other categories. Lastly, the all files section will show the entire file structure of the space pack, just like when viewing it from a computer.

The app itself has a number of bugs, many of which were fixed in the latest update. For example, photo thumbnails wouldn’t populate before, but they are now. The app would often crash somewhat often before, but doesn’t seem to with the update. There is a lot of room for improvement, however. For example, knowing the sizes of files will help you determine which ones you can share with others using the app’s integrated sharing feature (uses the standard iOS sharing APIs). This is useful to know because you can only share files with a maximum file size of 100MB. On the note of sharing, what you want to share will be copied to the phone’s internal storage first. This is just how mophie has to do things based off of the way Apple allows them. Another improvement would be for the app to show the actual battery capacity in terms of a percentage, instead of the typical 4 dots. This last improvement would be to allow you to double-tap on an image to zoom in. I was actually surprised that the app wasn’t already able to do that.

So, would I recommend this to people? Absolutely. Generally speaking, the space pack, combined with the space app, do what they’re supposed to do. Prices seem a bit elevated, but that’s to be expected when dealing with a mophie product. The case could use some design tweaks, and the app could use some bug fixes, new features as well as some basic app improvements, the latter of which should be available in due time.

If you’re someone who would enjoy having extra space to store content, mainly for media consumption, the space pack is an excellent choice. I would personally choose this over a Wi-Fi storage option due to this being well-integrated with the phone, since your phone actually installs itself into it while also keeping your phone somewhat charged. Offloading most or all of your media content onto the space pack allows you more internal space for things like apps. However, Wi-Fi storage options are still a viable choice, because it allows you store everything you have onto a large hard drive to take with you. Some even have integrated batteries for charging devices, so that’s something to think about.

What’s next for mophie? Nobody outside of their walls knows, but I think it would be neat to see one that has perhaps a microSD card slot on the side. This greatly expands upon the amount of storage that someone could have with their phone without having to swap cases. Load it up with a 128GB microSD card, and you should hopefully be set for everything that you would want to take with you on your phone.