Recording audio for professional reasons using your iOS device’s internal microphone probably isn’t the most ideal setup. Instead, using the iRig Mic by IK Multimedia (Amazon) will provide you with much better audio for a wide variety of occasions.

Included with your purchase comes the iRig Mic itself, an IK Multimedia booklet that shows their other available products and mobile apps, a registration card, a user’s guide, a carrying bag, as well as a mic stand holder. The mic bag is just long enough to house the mic, so the non-removable cable on the iRig Mic will be bent back quite a bit, which makes me question how long the cable would last if stored in that position for a long period of time. In the end, I opted not to use this bag while traveling. If the cable was detachable, it would be a no-brainer. 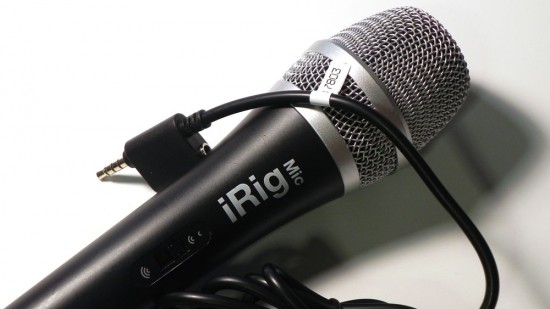 For the most part, the iRig Mic is your standard condenser microphone, made to work with mobile iOS devices (as well as some Android ones). It plugs directly into your device’s 3.5mm headset jack. Also on the end of the cable is its own 3.5mm jack which acts as a headphone passthrough from your iOS device. Using the free iRig Mic app from the iTunes Store, you can choose to monitor, in real-time, the audio from the microphone. This is good, for example, for those adjusting the mic’s 3 input gain switches to figure out which would be the best to use given the particular environment.

In regard to audio quality, the iRig Mic performs rather well, but don’t expect it to blow you away. It will be a much better solution, especially for singers, interviews, etc. You can hear a sample recording from our video review above. Audio from the mic can also be heard from all of our CES 2014 videos on YouTube. For the most part, the audio is clear, loud and works rather well in places with a lot of background audio. When things are too loud, the gain can be decreased.

All told, the iRig Mic is a reliable and affordable way of recording much higher-quality audio from mobile devices in a more professional manner that many will appreciate.