With a tip that’s just 2.3mm, the TruGlide Apex fine-point stylus gives you a more accurate way to use your tablet or smartphone. 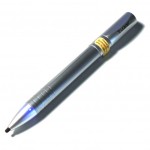 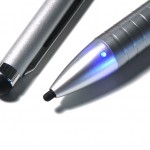 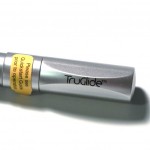 The Apex is available in both black and silver, each priced at $49.99. Unfortunately, free shipping is offered only on orders above $50, so the $49.99 won’t cut it. This probably isn’t a problem, considering you’re already paying close to $50, so an extra $5 or so for shipping shouldn’t hurt. Included with your purchase is the Apex itself, an extra nib/tip, a spare AAAA battery (I didn’t know that those existed until I received the stylus), as well as a quick start guide.

Fortunately, you’re paying for a quality product. The Apex is made mostly of brass which LYNKtech says weighs in, altogether, at 1.1oz/31 grams. Because of this somewhat high weight, it may cause some strain on your hand after long periods of use. In addition, there’s no real grip, so it’s generally not the most comfortable thing to use. This mostly comes down to the way that capacitive stylus pens work.

The Apex doesn’t use Bluetooth, so while there’s no pressure sensitivity, you don’t have to worry about compatibility problems with devices and apps.

For my testing, I used an iPhone 5s, Galaxy S5, and an iPad 2. The two Apple devices had anti-glare screen protectors installed, with is said shouldn’t cause any problems with use. With the stylus turned off, there was absolutely no interaction with my device. Once I turned it on, it all came back. Unfortunately, I found myself having to press harder on the displays than I normally would with my finger, or even a generic/traditional large rubber tipped stylus that didn’t require an extra power source. However, this was completely opposite when I used the Galaxy S5 smartphone. Even when the Apex was turned off, the pen offered a great amount of sensitivity on the display with not a lot of pressure added. Turning the stylus on, nearly no pressure needed to be added. This is more than likely due to the various display technologies that Apple and Samsung decided to use. Perhaps Apple’s issues are solved with newer iPads? I’m not sure, but I think it’s safe to say that using an Android tablet by Samsung, for example, would provides excellent results.

Personally, I found myself rather wanting to use the generic stylus more, because it weighed less and didn’t require as much force on the screen. This resulted in less strain during use. I imagine that, if you use applications that would better benefit from a more accurate stylus, then something like this would be a dream, especially if you plan on using it all the time. You’ll just need to remember to apply a bit more pressure when using it, at least on some of Apple’s devices.

Overall, the stylus itself isn’t a bad product for those who need or want to use something like this on a regular basis. Casual users may find some annoyances with it that make more traditional options a better choice.