Slim is in with Xoopar’s Powercard 1,300mAh battery bank ($24.99 from www.lafab.us). At just 5mm thin, Xoopar claims that this is “the slimmest powerbank ever,” allowing you to easily leave this in your pocket or other tight spaces without much bulk. 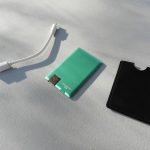 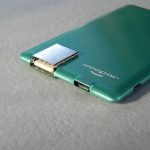 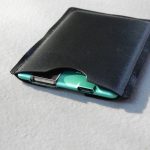 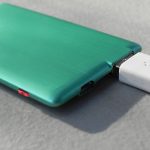 Aside from the Powercard, your 2,500 cents also includes a slim & short micro-USB cable (in white) and a small faux-leather sleeve. Some documentation is also included, consisting of a safety guide, warranty guide as well as a product overview & instruction guide.

The last piece needs some editing as it is incorrect about the colors lights that are displayed while charging as well as which colors represent its battery capacity. For example, it says that the green LED represents there being 0 – 32% battery remaining while red means 66 – 100%. While actually using the battery, it’s actually the other way around.

Using the Powercard is like any other power bank. Simply plug your device into the Powercard and charging will immediately begin. At its maximum output power of 1.3A, it took 45 minutes to add a 37% charge to my Galaxy S7, which means 1,110mAh was transferred from the battery to the phone. That’s roughly 85% the capacity of the actual Powercard, which is acceptable.

Where things took a negative turn was when charging devices with small batteries at slow rates. By the end of a three-hour smartwatch charge, the Powercard was nearly dead, and that was for a smartwatch that has a 380mAh battery. Even while putting together my video review, the Powercard went from a 100% charge to less than 32% in under 30 minutes of simple, brief periods of charging devices. I’m not sure if the battery has excess overhead, but it wasn’t quite right.

Due to the unreliable performance and higher-than-expected price ($12 – $15 sounds far more reasonable), it’s hard to recommend. Its premium build and clean design weren’t enough to save itself. Perhaps a second, fixed batch could do the trick, though a price decrease would still be appreciated. While it’s difficult to find batteries this slim, better batteries can be had for less money.