Some products simply aren’t ready to be handed over to their customers, and with iWALK’s See-through flip case for the iPhone 5, that’s certainly the case. 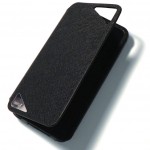 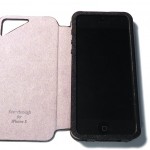 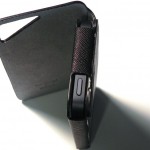 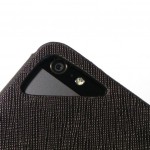 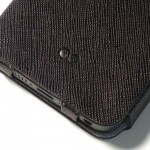 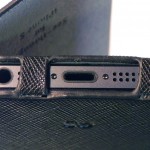 Before I get into the negatives, I’ll first start with the positives, as there actually are quite a few of them.

To start, the design of the case is rather good, offering a soft, quality microfiber interior with a hardened, textured outer material. For the most part, it’s pretty fashionable, except for the odd-shaped cutout that resides on the front cover. This allows you to see the upper-right portion of your iPhone 5. Why? I’m not too sure. I imagine that, if you don’t have brightness up all the way, you could see the battery percentage (if you have that enabled in the first place). I mention automatic brightness, because if you use the automatic brightness feature, your screen will be as dark as possible, as the front cover is actually covering up the ambient light sensor, not allowing you to see the battery percentage, assuming that that’s what iWALK was actually going for. The same exact cutout flows through to the back of the case, which is for the camera area.

The case itself is pretty thing, adding just a little bit of bulk for your device. The front flap is held shut via some magnets within the case’s frame.

First, the front cover doesn’t stay completely closed. The left spine simply isn’t long enough to completely cover your iPhone 5’s display. The magnet will try to keep it shut, but it will just open itself up again. If you try to stretch the spine’s material, perhaps the front cover would work better, but for now, it simply doesn’t work. This renders one of the main feature of the case to be useless and a bit flawed.

Another issue is that, while the front cover is closed, you can’t access the volume buttons or the silent switch that sites right above them. If you want to make simple volume adjustments, you’ll have to open up the flip cover first, which shouldn’t be much of an issue, since the cover is typically open anyway.

A rather huge flaw is with the bottom of the phone. There’s a small bit of material that covers up the entire microphone and at least half of the speaker to prevent the phone from sliding out from the bottom of the case. This means that phone calls with have big audio issues, as the microphone is simply covered up too much. I imagine that, if you use headphones with an in-line remote, then this might be alright, but only if you use those types of audio products exclusively. Fortunately, the headphone jack and Lightning port have no issues with coverage.

If it weren’t for those few but major flaws, this case would actually be pretty good. Unfortunately, given the case’s $34.99 price, lack of extras (like a screen protector, for example), and features that obviously have issues, I just cannot recommend anyone to purchase this case. If a fixed version finds its way online, then this case would absolutely be worth a look. But, until then, stay away.