Edit (Feb. 27, 2017): I advise anyone who’s interested in the Spectre x360 to look elsewhere. After using 5 (FIVE) different units, 4 of them exhibited very loose trackpads while the one with an okay trackpad had USB-C issues. HP’s lack of quality control is unacceptable and inexcusable, especially given the cost of the laptop.

I opted to try the more expensive $1,299 configuration, which is / was actually on sale for $150 less at Best Buy, totaling $1,149. You can find its product page here. HP even decided to throw in a faux-leather sleeve for the Spectre, which was a small but nice addition. 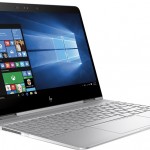 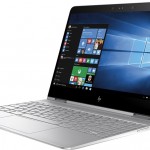 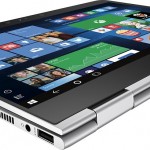 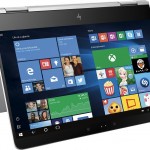 Update: While design is fantastic, build quality and quality control are pure garbage.

As you would expect for a laptop that costs more than a grand, the Spectre x360 has a fantastic design with solid build quality to boot.

Even better is that the display has extremely slim bezels, similar to the Dell XPS 13 and Lenovo Yoga 910. This allowed HP to make the entire laptop slimmer in width compared to others. It’s noticeable, and makes transporting it even easier.

Windows 10 actually handles touch on a large screen rather well, and I’ve found it a complete joy to use. While you can fold the screen all the way back to use the Spectre as a tablet, I often found myself folding it to an angle that makes it ideal for tabletop use. I’ll never buy a laptop that doesn’t have a convertible touchscreen.

As the display is only 1920×1080, the CPU and GPU aren’t working as hard as a more higher resolution display. Pixel density is plenty high enough for a screen of this size, so something like text appears nice and crisp.

On a laptop, it’s the best keyboard I’ve used. Key travel feels just right, and you get a great amount of feedback when the keys are pressed. Nothing I ever typed was missed, and it was simply a joy to type on. The sound of the keyboard was pleasant, too.

Despite there being a dealbreaking volume bug (as mentioned below), the use of four speakers resulted in loud audio, and thanks to some Bang & Olufsen tuning, it sounded pretty good as well.

Unlike most laptops, both USB-C ports are Thunderbolt 3 compatible, so you are able to use accessories such as external video card enclosures. Many will complain about this, but there is a legacy USB-A 3.0 port for your older devices. I personally wouldn’t mind if it did without the older port, as I want everything to be USB-C as fast as possible.

Update (Feb. 27, 2017): 5 of the 4 Spectre x360’s I used had very loose trackpads. HP’s lack of quality control is unacceptable given the price of this laptop. Therefore, I recommend skipping this laptop altogether.

Update: With even more tweaking of the Synaptics trackpad software, I haven’t experienced the issue with clicking nearly as much as before. Still, there is plenty of room for improvement.

HP opted to use non-Precision trackpads from Synaptics. While wide and comfortable, tracking isn’t quite as precise as I expected. I often found that, when clicking, the cursor would move as I’m pressing the trackpad down, resulting in clicking on things that I wasn’t aiming for. This alone is what drove me to return the Spectre. There is also a noticeable delay when using multi-finger taps, such as 2-finger tap-to-right-click. Further, an issue with quality was that, even if you gave it a light tap, it would sound as though there is a gap between the bottom of the trackpad and the Spectre’s chassis. Interestingly, this only occurred with the left half of the trackpad, but who knows when the other half will exhibit the same behavior. I’ve used trackpads on sub-$500 laptops that worked better than this, and were all Precision trackpads.

A funny part is that, when I was in the Windows 10 installer (where no specific trackpad driver was being used), the trackpad felt amazing: tracking was just about perfect, tapping was nearly instant, and clicks resulted in no moving cursor. This told me that this is certainly something that HP can approve on with just software-based changes.

In one test, I noticed a 6% loss in 9 hours. This is when the laptop was set to standby for 3 hours before hibernating (how it is by default). So, for 6 of the 9 hours, the Spectre was practically off. With standby set to 1 hour before hibernating, it still lost 4% in that same amount of time. It seems a bit much considering it shouldn’t be doing anything at all in either mode. Many people on HP’s support forum noticed something similar.

Update: An updated audio driver has been provided by HP which has fixed the below issue.

At one point, the volume of the speakers was stuck at the maximum volume. Some say that a restart of the laptop fixes it, but for me, they did nothing. It wasn’t until I completely uninstalled the audio driver and re-installed it when it fixed itself, but I wouldn’t rule out the possibility of it happening again at some point.

Update: An updated BIOS has been released by HP honestly seems like it helped with the coil whine issue outline below.

Coil whine is certainly a thing. When the laptop is on, you can hear it if you listen to about where the Bang & Olufsen logo is. What’s worse is that, when the laptop is off, plugged in, and already fully charged, this becomes very loud to where it will fill a small room. Unplug it, and it will instantly go away.

I’ve found that the fan would turn on regularly and at a noticeable volume. This was even when doing relatively basic tasks, such as browsing basic websites using Firefox. It didn’t help that the Spectre has two fans, rather than just one, which when on, still resulted in a noticeably warm machine.

Update: The BIOS update mentioned above may have been what fixed the USB 3.0 issue below.

There were several instances where, while transferring data to / from a USB-A 3.0 flash drive, it would stop working, as if Windows prematurely ejected it. I have never once noticed this on any other computer I’ve ever used it with. For it to just so happen to occur on the Spectre leads me to think that there is an issue with the laptop, not the flash drive.

Update: Because a few critical issues have been resolved, I can safely say that the HP Spectre x360 is now a very good laptop. If HP can: (1) release a BIOS update that allows the machine to get a little warmer to prevent the fan from being so noticeable, (2) continue to release trackpad updates to make it better, and (3) release an update to fix the still-bad standby battery life, this would perhaps be the perfect laptop. Still, I can certainly recommend it in its current state.

I really wanted this Spectre x360 to be my MacBook Air replacement, I really did. It unfortunately fell short in a number of unexpected areas. It’s a tad pricey, but I was fine with that, as the display and its thin bezels looked great. I also liked how it had not one, but two Thunderbolt 3 ports. I just couldn’t get around the unreliable trackpad, questionable standby battery life and various audio & USB bugs that I was experiencing. All three of those items are things that every laptop should nail at launch, not months later via software patches. The noticeable coil whine when plugged in, off and fully charged also wasn’t passable for me.

As this is the second of HP’s high-end laptops that I tried within a 2-week period, I don’t think I can give them another try for a very long time, if ever again.