Adding a protective case to a computer that is generally priced above $1,000 would be a good idea, and in that regard, Speck has you covered with their SmartShell line of cases for various MacBooks. In this review, I’ll be focusing specifically on the “poppy red” SmartShell for the 13-inch MacBook Air. You can find Speck’s full lineup of MacBook cases here. 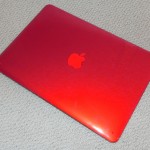 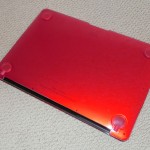 One immediate thing to make note of is that, as you’ve probably noticed, these aren’t cheap cases. You’ll be paying just about $50 for the SmartShell, regardless of if you get the 11-inch version for the Air or the 13-inch version, which seems a bit odd. On the bright side, I will say that this is probably a small amount to pay to add some protection to an expensive and probably important piece of technology. In addition, I’ve used similar cases that are far cheaper and have generally had good experience at first, later decreasing due to poor quality (clips breaking off, etc). Furthermore, those cheaper options that I happened to use didn’t include a warranty or any support. However, that’s not to say that I would’ve liked seeing this particular product listed at a cheaper price, perhaps at $39.99 instead of $49.99.

The SmartShell itself is a two-piece case to cover the bottom of your MacBook Air as well as the top/lid. There are several points of contact on both pieces so that everything is securely held onto your notebook. I would’ve liked seeing a few more clips along the bottom of the bottom cover, near the trackpad. The case can flex down a bit in this area, which could cause debris to get in-between the case and the bottom plate of your Air. Luckily, this only really happens if you manually flex that area yourself, so I haven’t had anything get in-between those places yet.

On the lid piece, there’s a Speck logo that would then be located in the bottom-left when your Air’s display is lifted up. The “poppy red” color that I opted to review, in my opinion, looks absolutely fantastic in almost any lighting condition, and really makes your notebook stand out amongst the rest. And because it’s a clear, glossy finish, the metallic finish from the Air’s aluminum construction makes things shine. On the flip side, because it’s glossy, you’ll see fingerprints and scratches far more than you would on the SeeThru Satin, also by Speck. But from a distance, they’re hardly noticeable.

Due to the sheer nature of this particular case, there’s not much else to say about it. It’s a fantastic, quality-built case. While its price might be elevated to some, it’s well worth the investment to protect something that costs much more.