Recent technology trends suggest that you can get a lot for a little. This is evident when it comes to smartphones and tablets, but what about computers? 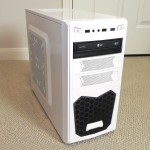 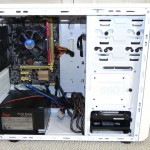 The YouTube video playlist embedded below contains 10 videos, all about this particular build. The first video is an introduction, while videos 2 through 8 are unboxings/overviews of each of the parts. Part 9 is a build video, while part 10 caps things off with the software.

I wanted to do this build for a couple of reasons. The first one is that I enjoy putting together PCs. The second is that I’ve been wondering how far a $300~ PC can actually go in terms of general performance. As mentioned, it seems that a little can get you a lot, even outside of technology.

The budget was $300 or below. Around the time I was looking for parts, Newegg had a special Shell Shocker deal that got all of the below components for just $269.99 (after a $10 mail-in rebate). These parts a little bit higher end than what I was looking for. So, if you’re looking to build something similar, you’ll have to swap some of the components out to keep the price below $300, if that happens to be your budget. You’ll see links below for Newegg as well as Amazon. If you happen to use our Amazon referral links for anything, you’ll be supporting the website! If an Amazon link is missing, then they don’t supply the particular part, but you can easily find an alternative. You can also find most of the parts from other computer hardware websites, such as Tiger Direct, Superbiiz, NCIX, as well as eBay.

I was also curious as to how the above build compares to what you might get from the likes of HP, Dell and Lenovo from your typical retailer, such as Office Depot and Best Buy. Not only was the build above cheaper, but it was generally faster. As an added bonus, this build is very upgradable, so you can keep everything inside for years to come while adding on certain components as needed.

One thing to note is that an operating system wasn’t included in the price. That’s because I already own genuine copies of Windows, starting from XP all the way up to Windows 8. Prices for Windows are typically near $100. That would make the operating system alone cost more than any of the other components. You may be better off finding someone who has a copy that you could use, or you could try a free operating system, such as Ubuntu/Linux. Ubuntu has come a long way in terms of software. If you’re a general user, it might actually be more than enough for you. When it comes to specific, Windows-only software, you can possibly emulate it inside of Linux, and when it comes to gaming, Linux isn’t quite there yet, but developer interest has been rapidly increasing over the past year or two.

In regard to the specific parts, all of them have their pros and cons. The G3220 CPU is quite speedy, but its integrated GPU is a beat weak, as you’ll find out in the gaming portion below. Another con is that it only supports maximum memory speeds of DDR3 1333MHz, not DDR3 at 1600MHz, which is the standard for memory speeds nowadays. It’ll automatically underclock the ADATA XPG DIMM to DDR3 1333MHz speeds. In actual usage, though, there’s really no noticeable difference. The case is very roomy, thus offering plenty of expansion areas and places for the power supply’s non-modular cables. There’s a 120mm intake fan on the front to pull in fresh air. It also has white LEDs. The only problem is that the front USB 3 port only operates as USB 2 speeds, because the ASUS motherboard doesn’t have a 20-pin front USB 3 header on it. Fortunately, the cable has another cable coming out of it that plugs into a USB 2 header on the motherboard, allowing you to at least use that port for USB 2 transfers. The rest of the motherboard is quite good. The LG DVD burner has some “M-DISC” branding on it. I would’ve opted for a LITEON DVD burner because it doesn’t have such unknown logos on it. The hard drive is pretty standard. I’ve used several Seagate drives in the past, and they’ve proven to perform well and last a long time. Lastly, the power supply isn’t bad, and has plenty of extra cables if you want to add other components in. Its fan also has blue LEDs. When everything’s turned on, the fans don’t get very loud, and nothing gets too hot to where the computer will act as a little space heater.

I was considering hackintoshing this system, but the integrated Intel HD Graphics simply aren’t supported in Mac OS X, with or without tweaks. All of the other components would’ve worked perfectly, so getting a dedicated and compatible video card might be worthwhile.

I decided not to perform synthetic benchmarks. This build isn’t for enthusiasts who like benchmark results and numbers. I found it to be for general users who want a good day-to-day computer to handle their general set of tasks. And simply put, this build handles all of it perfectly, and then some.

Even though we’re dealing with somewhat of a low-end Intel CPU (it’s not even multithreaded!), it still seemed to handle things without any problems. Windows 8.1’s Fast Boot feature works very well, allowing Windows to boot in less than 15 seconds from when you push the computer’s power button to when you’re at the Windows Metro start screen. Mind you, this is when using a mechanical hard drive, and not a solid-state drive.

After booting, applications loaded in a good amount of time, allowing you to immediately use them. Web browsing, at least with Internet Explorer. I didn’t test Chrome because, if web sites load well in Internet Explorer, there’s a pretty good chance that they’ll load fine in other browsers. Media playerback was just fine, as was the various Microsoft Office applications.

Ubuntu performed just fine, but since I don’t have much experience with it, I can’t say whether or not the performance could be improved.

All told, the general performance is very good, exceeding my expectations. Windows 8 is better optimized for lower-end hardware, and you can really see it shine on this particular hardware setup. As long as you aren’t doing intense video or photo editing, this computer wouldn’t be bad at all.

I was a little bit worried because the Intel HD Graphics aren’t even on-par with what you’d find on the Core series of processors, which I suppose was to be expected. More specifically, there’s no GPU model number associated, such as Intel HD 4000 Graphics. Instead, it was just labeled as Intel HD Graphics.

I tested the following games using the integrated GPU. You’ll find my comments next to each game.

I feel as though it’s safe to say that this computer goes to show that you don’t need something costing much more to be able to play games at smooth frame rates. Sure, you might have to sacrifice graphics quality, but it’s still very doable.

If you can spend a bit more, getting a dedicated video card of nearly any kind should do you better when it comes to gaming. A GTX 650 would be a good place to start. The power supply is plenty powerful, and the CPU shouldn’t be much of a bottleneck. Cheaper cards could also do the job, but for video cards, spending a little bit more will get you a lot more.

I didn’t do much temperature testing, mainly because there wasn’t a big, beefy GPU that would make everything hotter.

The G3220 proved to stay relatively cool, below 50 degrees Celsius, during a basic Prime95 benchmark. The temperatures came courtesy of Speedfan. The fans didn’t have to increase their speeds to keep things that cool, either. Intel probably could’ve pushed this little CPU further, but that might’ve cannibalized the sales of their more expensive models.

In the end, this system performed extremely well. When it comes to general usage, you wouldn’t be able to differentiate between this sub-$300 system or my personal gaming rig (2600K @ 4GHz, 8GB DDR3 1600MHz RAM, OCed 7950, 2 SSDs). Of course, when it comes to more resource-intensive tasks, such as professional video or photo editing, or even gaming, it falls behind. Fortunately, the motherboard and case leaves plenty of room for expansion or upgrades, and given the low starting cost, should last for many years to come.