Nowadays, with people using their portable devices more, you might want to keep them charged while out and about. Patriot’s line of FUEL+ portable batteries are a great choice, with battery capacities to fit anybody’s budget. 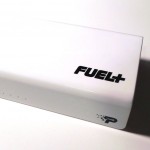 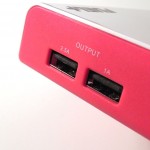 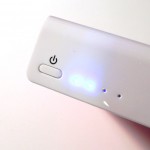 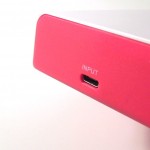 In particular, I’ll be taking a look at their top-of-the-line 9000mAh model, priced at $68.99 on Amazon, at least at the time of this review, and can be found here. Also at that link, as well as at the link in the intro, are Patriot’s other FUEL+ batteries at various capacities.

Included in the packaging is the battery itself, a short micro-USB cable for charging the unit (and can also be used with micro-USB devices), as well as instruction manuals in both English and French.

The design of the FUEL+ is very simple and straightforward, with the outer portion featuring a glossy white plastic, while the rest uses a semi-textured red plastic. On one side is the battery capacity indicator (each of the 4 LEDs indicating 25% capacity) and the power button, while another side has the micro-USB port. Opposite to that is the side with the 2 full-sized USB ports to charge other devices through. The left port has a 2.5A output, while the one next to it is 1A. You can use both at once for a total power output of 3.5A. It’s recommended to use the 1A output for smartphones and the 2.5A output for larger tablets.

I’ve been using the FUEL+ primarily to charge my iPhone 5s quite a bit, and it’s been working really well. At one point, I was using it to charge an iPad 2 at the same time, and they both were charging just fine. You can expect to get 5 full charges of an iPhone with this battery. Doing the math, you should technically get close to 6, but I believe that due to overhead and other things to consider, you won’t quite get that. Still, this battery would typically last me an entire week, given my charging scenarios. And because it’s very portable, you can take it with you nearly everywhere that you might go. Paired with a small, portable charging cable, you’ll never have to worry about your device(s) running out of juice.

All told, the FUEL+ by Patriot is a great little battery for keeping your device or two powered on while away from home. It’s compact, competitively priced and simply works well. If you’re looking for a large-capacity battery, Patriot’s line of batteries are worth a serious look.