While one could get a microSD card for their Android device for extra storage, why not get a USB flash drive that doubles as an OTG (on-the-go) drive? Patriot’s Stellar series of flash drives offer just that in a design that’s incredibly portable and worthwhile. It comes in 16GB, 32GB and 64GB capacities for $24.99, $34.99 and $44.99 from Amazon in orange, grey and yellow finishes, respectively. 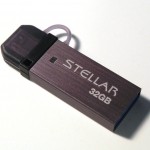 First, the design. The Stellar is a very small, miniature flash drive. It might actually be something that can be lost fairly easily, so perhaps an “XL” line of flash drives could have larger capacities, a bigger, physical design, and better speeds.

At first, it might not look like it’s a typical USB drive, since you don’t actually notice the USB plug sticking out of it. Instead, it’s actually embedded into the body of the flash drive itself, which helps save physical space. It has a smooth, metal construction that’s seemingly very durable.

On one end of the Stellar is your typical blue-colored USB plug that plugs directly into any standard-sized USB port. Because it’s USB 3, it’s also backwards compatible with USB 1.x and 2 ports. Opposite of the USB 3 plug is the micro-USB plug, which plugs straight into nearly any Android smartphone or tablet. Patriot says that it should be compatible with Android 4.0 (& up) devices.

I tested the micro-USB/OTG feature on a Samsung Galaxy S4, and found no problems. The fit of the plug into the phone was a bit snug, which leads me to believe that the plug itself is just a tad bit larger than most. The phone immediately recognized the flash drive, and its storage was then accessible in any app that supports external storage, such as ES File Explorer. Keep in mind that the OTG feature will only operate at USB 2 transfer speeds, even for newer Android devices that support USB 3 transfers.

Normal USB 3 performance is fairly good for a drive of this size. While Patriot doesn’t have specific read and write speeds, they do say that the 32GB and 64GB versions offer up to 140MB/s transfer speeds, while the 16GB version is up to 80MB/s.

In the basic ATTO benchmark above, read speeds topped out at nearly 145MB/s, above what Patriot mentions. I noticed very similar speeds during regular file transfer operations. This means that files will transfer from the device very quickly. The write speeds, though, are a bit disappointing, maxing out at just under 20MB/s in ATTO. Actual writes when transferring files to the drive were usually in the 30MB/s range, though.

Overall, Patriot has a winner on their hands with their Stellar series of USB 3 & OTG flash drives. They’re affordable, work well both in computers and Android devices, and offer good read speeds. The only downside that most might notice is the very small size of the drive as a whole. And while the write speeds could certainly be faster, they should be fine for most people, and the good read speeds should make up for that.