…if you live in New Zealand! As reported on Monday, the game was originally rumored to be released on the 28th. To the surprise of many, the game is now available. Or, at least it will be soon. As per usual iTunes App Store app releases, they tend to start at midnight in New Zealand, slowly rolling out throughout other parts of the world each hour. If you’re too anxious to try it, you can go ahead and make a New Zealand iTunes account to get the free game now. You’ll find the official screenshots and other information down below. Early reviews of the game are primarily positive, with many people criticizing the “pay all” and long wait times to progress within the game itself, let alone to race again, with some having to wait several hours before continuing to a new race. Are these “freemium” games the way to go? I’d rather just pay a set price to get everything at once, but these types of titles typically bring in more dough, which is all the big developers care about anyway. 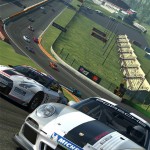 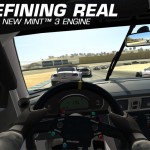 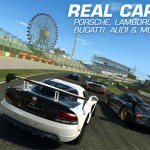 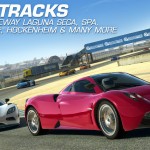 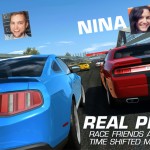 Hyper-realistic. Pure fun. And FREE. Real Racing 3 sets a new standard for mobile racing games – it really must be experienced to be believed.

Trailblazing new features include officially licensed tracks, an expanded 22-car grid, and over 45 meticulously detailed cars from makers like Porsche, Lamborghini, Dodge, Bugatti, and Audi. Plus, racing with friends gets kicked into another dimension with the reality-bending Time Shifted Multiplayer™ (TSM) technology.

REAL CARS
Featuring Real Racing’s largest roster of cars yet, don’t miss our new manufacturers like Porsche, Lamborghini, Dodge, Bugatti, and Audi. Take the wheels of over 45 intensely detailed racers and test your skills on an authentic 22-car race grid – for the first time on mobile.

REAL TRACKS
In another first for the Real Racing series, burn rubber on a full lineup of real tracks in multiple configurations from top locations around the world, including Mazda Raceway Laguna Seca, Circuit de Spa-Francorchamps, Silverstone, Hockenheimring, and many more.

REAL PEOPLE
Like nothing you’ve seen before, our innovative new Time Shifted Multiplayer™ lets you race anyone, anytime – even if they’re offline! Every career event is filled with fully interactive, AI-controlled time-shifted versions of your Game Center or Facebook friends, as well as other players from around the world.

MORE CHOICES THAN EVER
Compete in over 900 events like cup races, eliminations, endurance challenges, and drag races. Upgrade your car parts to maximize performance. See the action through a variety of camera angles and fine-tune the controls to your personal preference.

Welcome to the definitive racing experience for everyone, everywhere.