While some video card makers might include custom and pre-installed waterblocks onto their high-end cards, ASUS went the way of including their own closed-loop water cooling setup to cool not one, but two insanely fast AMD Radeon HD 7970 “GHz Edition” GPUs. The cooling setup is said to achieve “up to 31C cooler operation compared to a reference GTX 690,” which is saying a lot, given AMD’s track record of GPU temperatures. 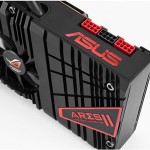 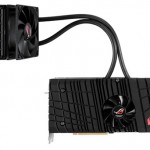 Since it’s not using your typical air cooler, a card like this will just need to take up the standard two slots, rather than three as some might expect. The design is quite unique, primarily consisting of a black and red ROG-inspired color scheme.

Due to the high-powered GPUs, you’ll need 3x 8-pin power connectors. In terms of pure specs, you can expect:

If you’re interested in this card, there is one catch, however. This is a limited edition card, meaning that only a certain number of them will be produced until they’re extinct. ASUS says that they’ll only be making 1,000 of these babies, so you better start digging into your wallet now before they go on sale later this year. Exact pricing and availability are unknown at this time, but given the pricing of ASUS’s top-of-the-line GHz Edition 7970, we’re basically combining two of those GPUs into one card that features water cooling and some other goodies to make it perform like no other. I’m estimating that this beast will cost around $1,250, but even that might be quite generous.

For full details, you’ll find the press release below.

Continuing the ARES legacy with collectible hardware for enthusiasts

Launched in the summer of 2010, the original ROG ARES provided a new milestone in graphics power that soon became an in-demand commodity among hardware enthusiasts and collectors. ARES II likewise debuts as a limited edition product, with only 1000 units produced. It ships in a special ROG-themed case, with each card featuring a laser-etched serial number on the aluminum backplate to denote its collectible status.

ARES II provides a custom cooler that utilizes liquid and air cooling to achieve drastically improved heat dissipation over reference design cards. The hybrid design consists of a closed-cycle liquid system with dual 120mm fans and a radiator block that easily fits in most PC cases. The card itself includes an 80mm dust-proof fan to enable additional cooling for critical components such as video memory and power delivery components. The new design assures continuous stability even under full load, and achieves up to 31C cooler operation compared to a reference GTX 690. ARES II features a 2-slot height design, making it accessible to most PC cases on the market.

To be announced near product launch and may vary by market. Product specifications and features may change without prior notice. Check usa.asus.com or rog.asus.com for further details.